The Rummy Variants on A23 are as follows

Points Rummy Points Rummy is the fastest form of Rummy Rummy - each game lasts for one deal only. After each game, the winner gets the chips from the other players depending on the count and point value. Not only do these games require a high level of skill but also generate tremendous excitement. Players can play and win a high number of games in a short span of time.

At the end of each game, Number of Chips added to Winner = [Sum of Counts of other players X point value] - A23 Commission.

A very popular format of rummy, also known as "Syndicate", where the least scoring player wins. Pool rummy games are played among 2-6 players and the objective for a player is to keep the score as low as possible for each game. If the total score reaches or goes above 101/201, the player is eliminated and the last player remaining wins the game.

For all entry amounts less than or equal to 100,

If 2 players are left with no drops, the prize pool will be automatically split

This is a fast and exciting rummy format where 2/3 rounds or "deals" are played between 2 players. The player with lesser count at the end of 2/3 deals is the winner.

Half count in case of deal show is not available in bestofX Games.

Player will have no option to drop or middle drop in the game. However, When player doesn't take any action in the given time then it will be timer dropped with full count score and will be shown as drop/middle drop in the result window.

A new rummy format where 2/3 rounds or "deals" are played between 2 to 6 players.The player with lesser count at the end of 2/3 deals is the winner.

Another exciting feature is that The last round score(Second round in Bo2 and third round in Bo3) of all the players would be doubled.

So user could score anywhere between 0 to 160 points in the last round.

Lets say 2 players have joined a Best of 2 Grand table and scores of the players are:

After round 2 is completed, If it is a normal Bo2 game then the scores will be tied and winner will be decided in round3. But in Bo2 Grand game, Scores of round 2 will be doubled i.e Player 1 score will be 0 and player 2 score will be 40. So the final scores at the end of 2 deals are Player 1 : 20 , Player 2: 40 and Player 1 will be declared as winner.

Addition to the above, We have also made drop option available in this format.(Initial drop and middle drop are available).

Note: Double the score feature and drop option is not available for all games. Check out the Game joining confirmation pop-up for the availability.

You can now play Rummy at a Gun Shot speed with this new game type. It lasts for only one deal with no middle drop and time banks. This Game can be played among 2-6 players.

Winning Amount at the end of each game = (Total amount other players lost) + Winner's entry amount - A23 Commission.

A23 now offers various new tournaments flavors targeted to provide an exciting rummy tournament experience to all kinds of players. Now our premium players will have an array of eligible tournaments to choose from based upon their ace levels, interest, premium conversion date and add-in options.

What are Multi-Table Tournaments?

Multi Table Tournament is a format that invites large numbers of players to compete against each other. It is basically like a race, where all participating players start with equal no. of chips and play Rummy for a certain amount of time. The player to have the maximum chips in the end wins the tournament.

What are the different types of tournaments I can play?

A player can choose among the following tournaments available under "Tournaments" tab on the game client lobby:

Where can I find it?

In the game client lobby, you can find these tourneys under "Tournaments" tab in the respective sub-tabs. 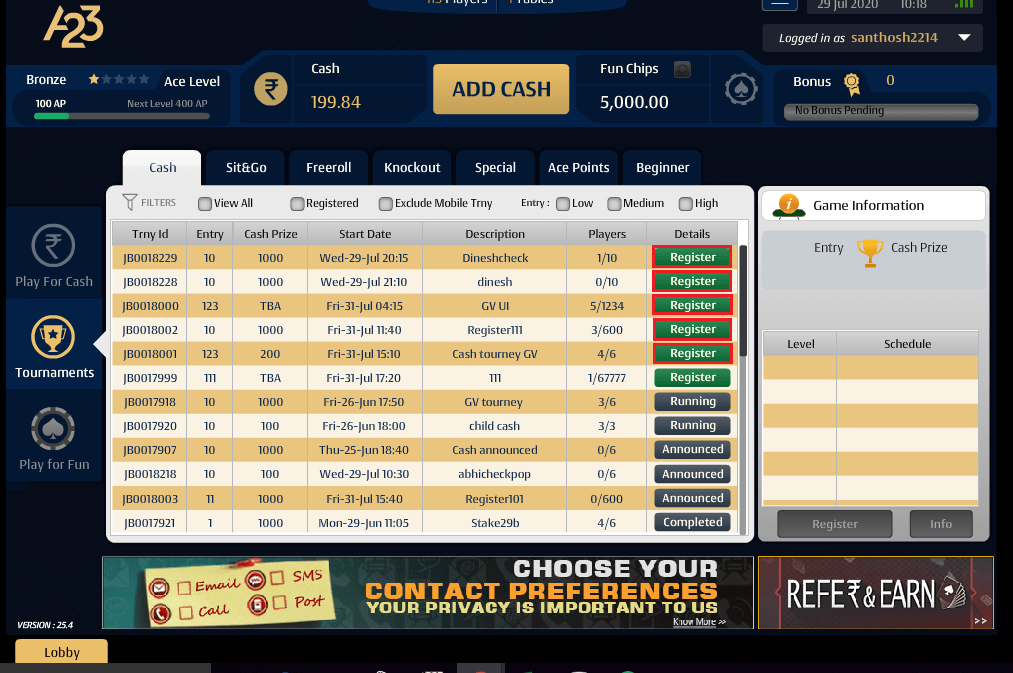 How to Register for a Tournament?

Registration to a tournament can done by logging into the A23 App and taking following steps.

Where can I find the latest up-coming Tournaments?

A23 will, at all times, consider the best interests of the game and fairness as the top priority in the decision-making process. Unusual circumstances can on occasion, dictate decisions in the interest of fairness, that take priority over technical rules.

Important information about each tournament, including the structure, length of rounds, re-entry and break information, can be found by clicking the 'Details' button in the tournament lobby. A23 reserves the right to change the parameters of any tournament at any time without prior notice.

Seats are assigned at random. Seat changes are not permitted. Tournament tables are collapsed and merged frequently to avoid any chances of collusion.

Drop = 10 x entry
Middle Drop = 30 x entry
Max Count = 80 x entry
Half Count: In case of Deal Show, count for players who have not played yet will be Half Count

A Tournament may have different Levels and different entry amounts per level. This information is available on the Tournament Lobby and level duration may differ. All players begin the first level of the tournament with an equal number of T-Chips.

As for Multi-Table Tournament:

Players are eliminated when the number of T Chips they have is less than the max count multiplied with the entry amount of the current Level.

Each Tournament Level requires you to have min T-Chip balance in order to qualify for the next Level. You will be eliminated from the tournament if you fail to do so.

In order to be eligible to Re-entry in a Tournament, you must have sufficient cash balance in your A23 account. Players without sufficient funds remaining in their account will not be able to Qualify for the next Level.

When a player's T.Chip balance falls below the minimum balance required to continue in the same Level (or Qualify for next Level), Player will be prompted to Re-entry to stay in the Tourney. Just after Re-entry, Player can start playing without having to wait for the next Level to begin. This will be valid for all Levels except the last Level, where one can Re-entry only during the Break before the Final level.

Prizes will be awarded as stated in the Tournament Lobby, except when a tournament is cancelled. Prize structure depends on several factors including the number of entrants and if it is meant to be a guaranteed payout.

However, winnings from Tourneys under Freeroll tab will be added to your redeemable balance only upon amount used for playing the tourney winnings atleast once.

Ranking will be decided based on player's Tourney chips and Tourney level. A Player with higher T.Chips and level will be awarded with higher rank.

There are two players with T.Chips 3000 and 4000 respectively and both have reached final level of the tourney. So the player with 4000 T.chips will get higher rank.

There are two players with T.chips 2000 and 3000 respectively. Player with 3000 T.chips is eliminated in previous level and player with 2000 T.chips has reached final level.

Here, Player with 2000 T.chips will be awarded with higher rank as the other player has failed to reached the final level.

Note: If Two players are assigned with first rank then the sum total of 1st and 2nd prize amount will be equally distributed between the two players. After this, 2nd rank will be skipped and ranking will continue from 3rd rank.

Players are only allowed to participate in a tournament once. Using multiple accounts to enter multiple times into a single tournament may result in a warning, disqualification from the tournament, alongwith partial or full forfeiture of winnings and barring from A23.

The break schedule for a tournament can be found in the Tournament Lobby Page and is the difference between the Start Time & End Time of the levels. New hand will not start incase only 1 min remaining before break start time.

By participating in a tournament, a player accepts the risk of Internet disconnection, due to problems with the connection between their computer and the servers, lag or freeze or some other problem in the player's computer or the Internet. A23 does not accept any responsibility for a player disconnected while in a Tournament, except in the case of a server crash.

While each user is responsible for his or her own Internet connection, A23 makes an effort to protect players who are disconnected and Auto Play will be available for 3 rounds, afterwhich the game will be middle dropped. During this time, if another player makes a successful show, the disconnected player will be considered as middle dropped.

Rummy is an individual (not a team) game. Any action intended to help another player is unethical and is prohibited. Unethical play, such as playing less aggressively against a partner and chip dumping (intentionally losing chips to a partner), may result in account suspension, including seizure of funds from the offender's account and/or termination of the account. A23 routinely reviews game play to look for violations of our rules and to ensure the integrity of our games. It may be necessary to withhold player winnings until the completion of game play reviews.

In a scenario where there are more than or equal to 2 wrong shows in a round, the winner of that round will be awarded with only the initial drop value for the wrong shows, and not with full count.

In special circumstances, when a tournament needs to be cancelled because of a crash or some other reason, participating players will be communicated with alternate Tournament Details and / or refund of Tournament Entry + Re-entry amounts.

Turbo mode add following to any game if turbo is enabled for the particular game type.

We have created an exclusive private arena so that you can fight with your friends on your own terms. You get to choose between the most popular variants, namely - Points rummy, 101 Pool, 201 Pool, and Gun Shot.

So, Invite your family and friends to play real cash games with you NOW!

How To Host a Private Table

It is really easy for you to host a private table at A23. Follow these effortless steps to create your table in no time:

2) In the Game Lobby, Navigate to Private Tables.

6) Your table is ready to host a game with your friends and family. Share the table code and play together.

7) Host can also "Remove" a player from the table if an intruder has joined the table.

8) Click on "Start game" button once your friends have joined the table.

How To Join A Private Table Created By Your Friend

Once you have a table code-shared by a friend hosting the private game, follow these simple steps to join the table:

2) In the Game Lobby, Navigate to Private Tables.

4) Enter the code shared by your friend who created the table and click the "Join" button.

5) Wait for the host to start the game and have fun!

Note: Please be informed that the pending bonus amount will not be released while playing private tables.

The HAPPY HOUR is here! Play more to win more, participate and win exciting cash back. So what are you waiting for? Hurry!

Check below for Happy Hours Game and Entry Types

Check below for Turbo Table Game and Entry Types